Our Lady of Grace, Ipswich

The pilgrimage you don't know you're on until you get there is the best kind! Yesterday I made a journey for entirely mundane reasons, only to realise I had ended up in the exact place that I had been wanting to make the object of a pilgrimage for a long time.


Bear with me on this post - it does sound a bit like the sort of thing Alan Partridge might tell his PA Lynn to start off with!


Yesterday was a difficult day for my wife Lisa. Our daughter Lucia had been awake in the night and whilst I had slept in the spare room because I had work the next morning, Lisa was awake most of the night with Lucia. Consequently when I got home in the early afternoon, Lisa was very much in need of a break!

I took Lucia out for a drive to give her mum some space and in the hope that she would have a nap, which she did. I had a vague plan to go to a retail park and have a look around the John Lewis department store there. As I drove with the little one asleep in the back I realised I didn't really know the way to this store; I knew I had to go on the ring road around Ipswich, but not much more than that. Anyway, I obviously missed the turning, as I ended up driving into the centre of Ipswich. Not having done this before, I drove aimlessly along in the mid-afternoon traffic, with a vague idea that I would park somewhere near the town centre, and wait for my daughter to wake up before doing a bit of shopping.

So far, so Alan Partridge. But actually, the mundanity of the journey is a key part of its importance for me. The Marian Option is about, or one of the key things about it is, that we don't need to retreat from public spaces, from the everyday, in order for it to work - in fact it is about an inner change of attitude which can transform your relationship to the everyday.

Anyway, I decided to park up in the first car park I found in the town centre, which was called The Spiral. It is an unusual one in that it winds down underground in a large spiral, with cars parked on either side of the winding tunnel. I parked and waited for Lucia to wake up. As I sat with nothing to occupy me, I began to pray a rosary, and with the beads passing through my hands, and my thoughts focused on the sorrowful mysteries, my mind began to enter a contemplative mode.

I realised that I had passed the classic mythological threshold of adventure and peril - the descent into the earth. Maybe Dante didn't have in mind the entrance to the inferno in a car park in East Anglia, but you have to make do with what you have sometimes.

Of course, Dante had his guide Virgil to lead him through the danger, and I had my guide, the Blessed Mother to aid me as I began my daily effort at battling my vices with the graces obtained from that most powerful of prayers.

At the back of my mind I was also aware of something else that I had wanted to do for the last few months, ever since my imagination was fired by reading about the Marian shrines of East Anglia - and that is to visit the site in Ipswich of an important medieval shrine to Mary on Lady Lane. I wondered if it might be within walking distance.

When I finished my rosary I had a look at the map. The Spiral appeared to be almost directly underneath Lady Lane! When Lucia woke I put her in the buggy and ascended, crossing another car park above ground and, there it was; Lady Lane! 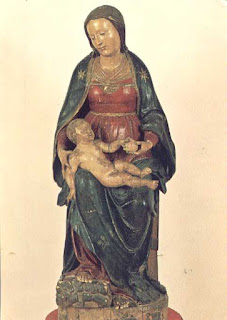