The Grand Inquisitor; 'Freedom' and Terrorism

"As a good number of commentators have noted in recent years, the opposition, now canonical in the public language of many governments, between the "freedom" of the North Atlantic cultural milieu and the nightmare of terrorism and fundamentalism that exists outside this enclave is more and more vacuous. Freedom as a designation for maximal consumer choice (including the consumerizing of public service and personal care) combined with an economic jeu sans frontieres is an indifferent rallying point for moral conviction, conviction about the goodness or justice rather than simply the comfort of a society. ... Faced with a global ideology of resentment, as wholly modern in its formation as is western secularism, an ideology equally determined to end history in its preferred way for the sake of an absolutely manifest social good, our rhetoric of defending freedom does not make a very persuasive showing.

One of the things that makes Ivan's Inquisitor such a perennially haunting figure is that his voice is clearly audible on both sides of the current global conflict. He is both the manager of a universal market in guaranteed security and comfort for a diminished human soul and the violent enforcer of a system beyond dialogue and change. And we may feel a similar unease at the way in which the profiles of terror are sketched in Devils: the selfless fanatic and the solipsistic libertarian are pushed together, at the mercy of anyone with the material and communicative resources to manipulate them. Repeatedly, he [Dostoevsky] insists to his readers that this is what a world without icons, without presence, will mean."
Rowan Williams, Dostoevsky; Language, Faith and Fiction 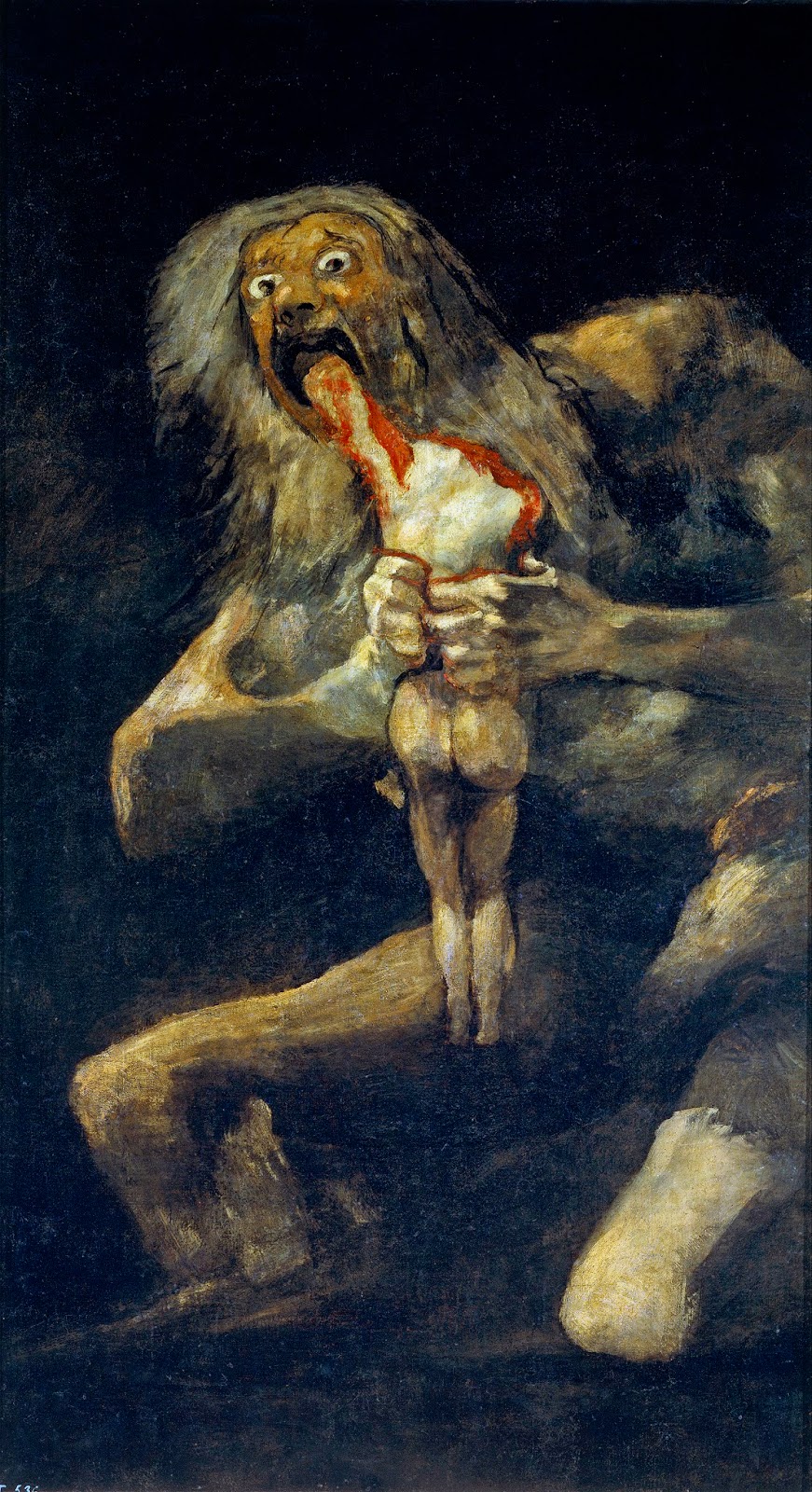 The Grand Inquisitor, a famous passage in Dostoevsky's novel The Brothers Karamazov, presents us with a conflict between heroic freedom and comfortable enslavement. You can read it here (Book 5, Chapter 5; p221 of the pdf)

The Grand Inquisitor throws into stark relief the incoherence of the modern notion of freedom post-Enlightenment. The Islamists know that the West's talk of freedom is empty, based as it is on a system of absolute abasement before the gods of the marketplace. We have chosen comfortable enslavement rather than freedom, or freedom to choose between many different products:

“The world says: "You have needs -- satisfy them. You have as much right as the rich and the mighty. Don't hesitate to satisfy your needs; indeed, expand your needs and demand more." This is the worldly doctrine of today. And they believe that this is freedom. The result for the rich is isolation and suicide, for the poor, envy and murder.”
(Karamazov again)

The problem is that freedom in the west today is actually freedom-from, in which case it is a value that is founded on a negative, on a repudiation of something else, and thus, is at the outset a reactive rather than an active quality. The act of liberation that our ideals of freedom are founded on was actually itself a violent and reactive act. It was a tearing-away of state from religion in the revolutions of the 18th and 19th centuries.

Rather than any more of my own poor rambling, I shall leave here some links to articles which expand on this last point.

This blog post by Artur Rosman on how The ‘Wars of Religion’ were actually ‘Wars of the Birth of the Nation-State.’

Over at Gornahoor, Cologero continues his defence of Tradition with his usual acuity: "One use of intelligence, or rational thought, is to determine how best to achieve a goal. This is instrumental intelligence. True intelligence, however, is to know what goals to aim for."

An Office for the Dead

An Office for the Dead

So let all my enemies be ashamed
and very much troubled.
Let them be turned back,
and be ashamed very speedily.

Eternal rest grant unto them, O Lord,
and let perpetual light shine on them.

First Reading
My dear people, since God has loved us so much, we too should love one another. No-one has ever seen God; but as long as we love one another God will live in us and his love will be complete in us. We can know that we are living in him and he is living in us because he lets us share his Spirit. We ourselves saw and we testify that the Father sent his Son as saviour of the world. If anyone acknowledges that Jesus is the Son of God, God lives in him, and he in God. We ourselves have known and put our faith in God's love towards ourselves. God is love and anyone who lives in love lives in God, and God lives in him. Love will come to its perfection in us when we can face the day of Judgement without fear; because even in this world we have become as he is. In love there can be no fear, but fear is driven out by perfect love: because to fear is to expect punishment, and anyone who is afraid is still imperfect in love.

V. Out of the depths I cry to you, O Lord. Lord hear my voice.
R. Remember me O Lord, my life is but a breath.

Let us pray.
O Lord, whose nature it is to have mercy and spare, we humbly beg your mercy on the souls of the faithful departed, that through your mercy and our feeble prayers, they may attain to that glory which they have always desired. Through Christ our Lord. Amen.

I Dreamed I Saw Robin Williams 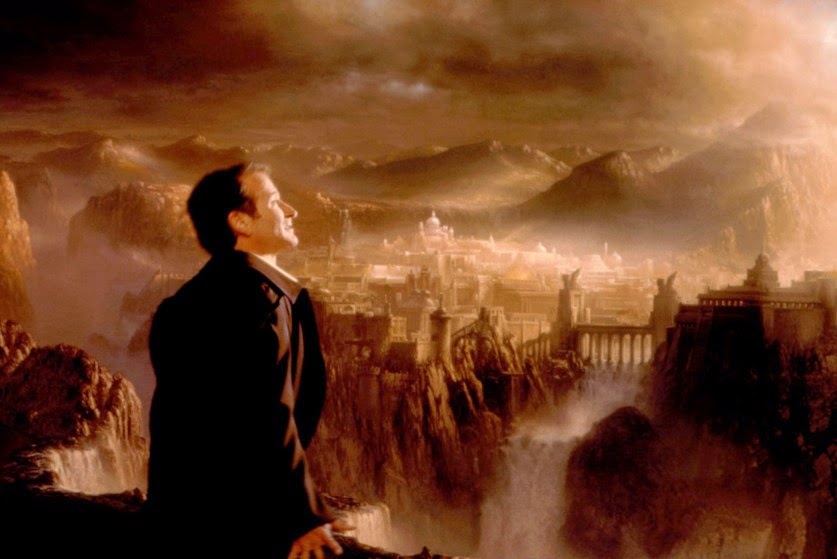 Last night I dreamt that Robin Williams came back to tell me what the afterlife was like. He warned me that I would not escape God's wrath without prayer and good works. He said to pray vigilantly to become emptied of all desire and earthly vanity so that I might be filled with God's grace.

He showed me a place where souls were bound to the earth by the weight of their sin, some of them flattened by it, and the great fire of God's love was blowing on them, but instead of being caught up in ecstasy by it, it was a great torment to them, and they struggled to escape its heat. Robin Williams said that God's wrath was the flipside of his love, exclusively the result of a constant rejection of love both of God and neighbour in this life.

This worried me somewhat, and I awoke in distress, and I put my head against the window and looked out at the cold sad new year's day, and thought about all the worries of the coming years, and wondered what this year and all the years in my future would bring.