And the light shineth in darkness; and the darkness comprehended it not. (St. John 1:5)

One does not become enlightened by imagining figures of light, but by making the darkness conscious. (Carl Gustav Jung)

My year begins in my mind at the fag-end of 2013, in those intermediate days of wind and rain between Christmas and New Year. For us they were particularly limbo-like last year, as our daughter was due to be born on Christmas day, but showed no signs of coming. So we were waiting around...

And then we were waiting no longer. Lisa was being wheeled into the operating theatre for an emergency caesarean, as the baby showed signs of being in distress. When they took her out there was no crying, and they called for a doctor. The room, the instruments, the people, became intensely real; there seemed to be a gaping chasm within me which was going to pull me in. I heard a cry and they called me over. They were sucking fluid out of Lucia's lungs, and warming her under a heater. the doctor said she hadn't breathed for about 90 seconds, but she was fine now. He said new born babies can go for 5 minutes or longer without breathing and be fine. This was actually the least worrying of all the things which had happened.

Later the doctor who had done the surgery explained to us that she hadn't been able to take Lucia out the normal way - she was positioned strangely, and had got her shoulder stuck when they tried to pull her out - they had broken her collar bone. But not only that, they had had to make not one incision but two in the shape of a T, in Lisa's abdomen, to remove Lucia, and so had to cut into the upper uterus, which is rather dangerous, and Lisa had lost a lot of blood. She might have to go back in to the operating theatre if the bleeding didn't stop.

This is where things got a bit too much for me! It seemed like they had only just escaped something fateful. Were we through the worst, or was there more to come? This question is one I have asked myself a lot recently, but last winter, in that relentless pounding of the elements, it felt like we were really under siege by malevolent forces.

Lucia's collar bone healed, Lisa's painful incisions healed; time, the great healer, did his work. And within that chaos and darkness and suffering, a beautiful light was cast by our child, our joy.

And that might have been all there was to say, but three weeks later we got the news that Lucia had Cystic Fibrosis, a life-shortening genetic disease. Coming to terms with this has really been part of what has made this year so challenging, but in a strange way, I feel that we have come out of it with so much more. Time will not heal this particular cross that Lucia will have to bear. It will be hard for her and for us. But that is somehow inseparable from, and does nothing to subtract from, the joy - unutterable and sublime - that is to get to know Lucia as she grows.  How blessed we are!

So we thank God for the year, and look with hope to the future - I wish readers a happy and blessed new year!

Edit:
I remembered a few other things that happened in 2014: I went part-time at work and my book got published! Take a look here 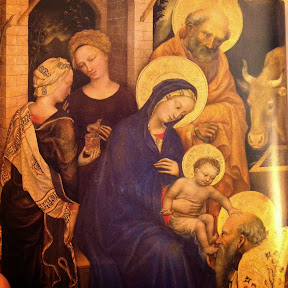 Sooner or later it becomes alarmingly clear: Yes, I am Israel. I am the ox that does not know its owner. And when, appalled, we get down from the pedestal of our pride, we find, as the Psalmist says, that our soul lifts itself up; it rises, and God's hidden presence penetrates ever deeper into our tangled lives. Advent is not a miracle out of the blue such as is offered by the preachers of revolution and the heralds of new ways of salvation. God acts in an entirely human way with us, leading us step by step and waiting for us. The days of Advent are like a quiet knocking at the door of our smothered souls, inviting us to undertake the risk of stepping forward toward God's mysterious presence, which alone can make us free.

From 'Seek That Which Is Above' by Joseph Ratzinger