The Eucatastrophe of Eowyn and Faramir 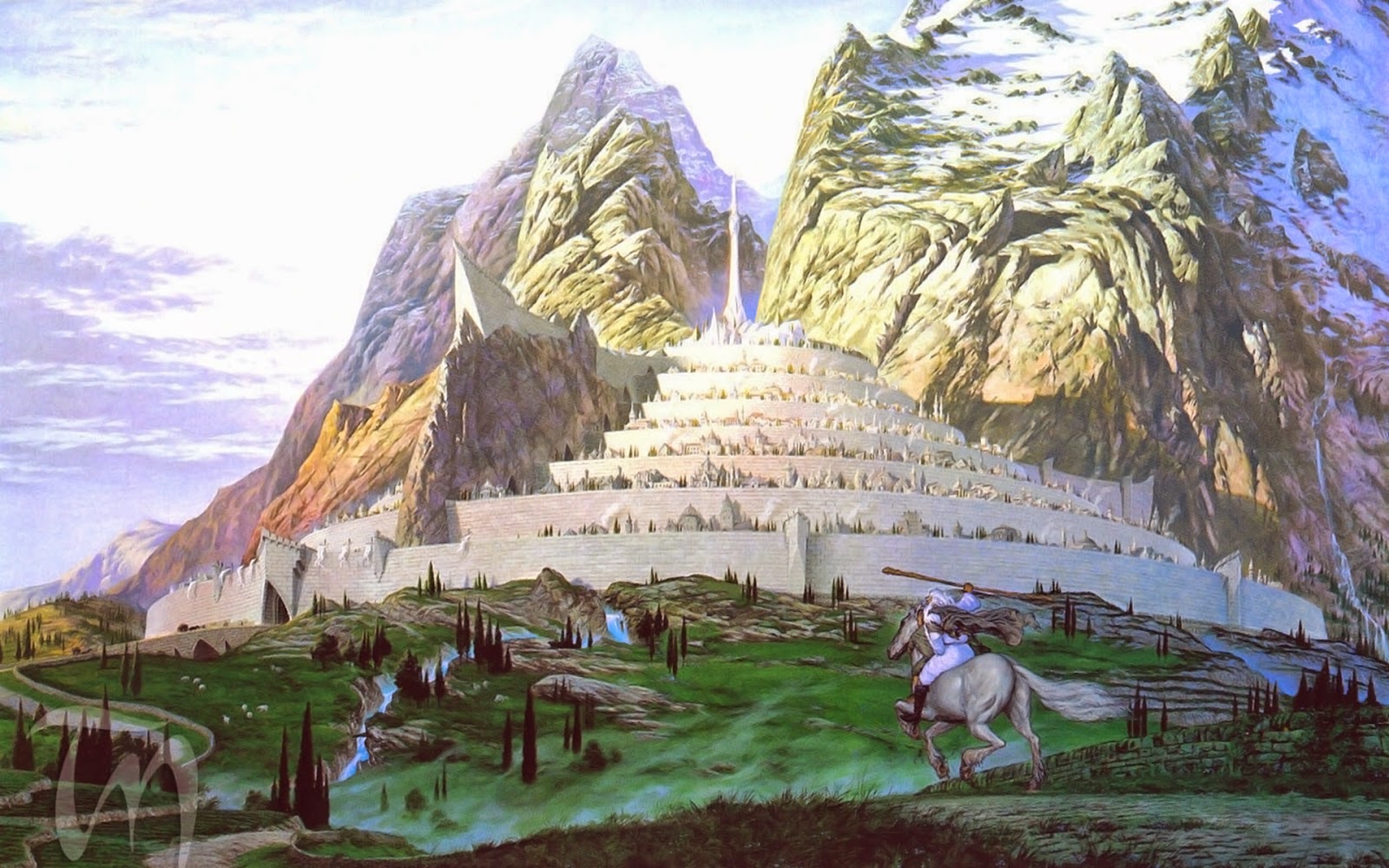 'Yes, we wait for the stroke of doom,' said Faramir. And they said no more; and it seemed to them as they stood upon the wall that the wind died, and the light failed, and the Sun was bleared, and all sounds in the City or in the lands about were hushed: neither wind, nor voice, nor bird-call, nor rustle of leaf, nor their own breath could be heard; the very beating of their hearts was stilled. Time halted.

And as they stood so, their hands met and clasped, though they did not know it. And still they waited for they knew not what. Then presently it seemed to them that above the ridges of the distant mountains another vast mountain of darkness rose, towering up like a wave that should engulf the world, and about it lightnings flickered; and then a tremor ran through the earth, and they felt the walls of the City quiver. A sound like a sigh went up from all the lands about them; and their hearts beat
suddenly again.

'It reminds me of Númenor,' said Faramir, and wondered to hear himself speak.
'Of Númenor?' said Éowyn.
'Yes,' said Faramir, 'of the land of Westernesse that foundered and of the great dark wave climbing over the green lands and above the hills, and coming on, darkness unescapable. I often dream of it.'
'Then you think that the Darkness is coming?' said Éowyn. 'Darkness Unescapable?' And suddenly she drew close to him.

'No,' said Faramir, looking into her face. 'It was but a picture in the mind. I do not know what is happening. The reason of my waking mind tells me that great evil has befallen and we stand at the end of days. But my heart says nay; and all my limbs are light, and a hope and joy are come to me that no reason can deny. Éowyn, Éowyn, White Lady of Rohan, in this hour I do not believe that any darkness will endure!' And he stooped and kissed her brow.

And so they stood on the walls of the City of Gondor, and a great wind rose and blew, and their hair, raven and golden, streamed out mingling in the air. And the Shadow departed, and the Sun was unveiled, and light leaped forth; and the waters of Anduin shone like silver, and in all the houses of the City men sang for the joy that welled up in their hearts from what source they could not tell.

And before the sun had fallen far from the noon out of the East there came a great Eagle flying, and he bore tidings beyond hope from the Lords of the West, crying:


Sing now, ye people of the Tower of Anor,
for the realm of Sauron is ended for ever,
and the Dark Tower is thrown down.

Sing and rejoice, ye people of the Tower of Guard,
for your watch hath not been in vain,
and the Black Gate is broken,
and your King hath passed through,
and he is victorious.

Sing and be glad, all ye children of the West,
for your King shall come again,
and he shall dwell among you
all the days of your life.

And the tree that was withered shall be renewed,
and he shall plant it in the high places,
and the City shall be blessed.

And the people sang in all the ways of the city.


The Return of the King, J R R Tolkien

"I coined the word 'eucatastrophe': the sudden happy turn in a story which pierces you with a joy that brings tears (which I argued it is the highest function of fairy-stories to produce). And I was there led to the view that it produces its peculiar effect because it is a sudden glimpse of Truth, your whole nature chained in material cause and effect, the chain of death, feels a sudden relief as if a major limb out of joint had suddenly snapped back. It perceives – if the story has literary 'truth' on the second plane (....) – that this is indeed how things really do work in the Great World for which our nature is made. And I concluded by saying that the Resurrection was the greatest 'eucatastrophe' possible in the greatest Fairy Story – and produces that essential emotion: Christian joy which produces tears because it is qualitatively so like sorrow, because it comes from those places where Joy and Sorrow are at one, reconciled, as selfishness and altruism are lost in Love."" J R R Tolkien - Letter 89

Last night I attended my first Easter Vigil - this is only partly out of lack of motivation to go - I am a cradle Catholic, but my parents never went or took us, and I never really was taught the importance of it or the triduum until I started more consciously and more seriously trying to live my Catholic faith. I actually first became intrigued by a reference to it in Evelyn Waugh's novel Sword of Honour where the soldier mentions the exsultet being sung at that moment around the world. For me it was a deeply moving experience, in which a rite with very ancient origins immerses you in the profoundest mysteries of the faith - without which the suffering and death of Good Friday, nor the joy and glory of Easter Sunday would make sense - Alexander Schmemann says this of Holy Saturday:

The "Great and Holy Sabbath" is the day which connects Good Friday, the commemoration of the Cross, with the day of Christ’s Resurrection. To many the real nature and meaning of this "connection," the very necessity of this "middle day," remains obscure. For a good majority of churchgoers, the "important" days of Holy Week are Friday and Sunday, the Cross and the Resurrection. These two days, however, remain somehow "disconnected." There is a day of sorrow, and then, there is the day of joy. In this sequence, sorrow is simply replaced by joy . . . But according to the teaching of the Church, expressed in her liturgical tradition, the nature of this sequence is not that of a simple replacement. The Church proclaims that Christ has "trampled death by death." It means that even before the Resurrection, an event takes place in which the sorrow is not simply replaced by joy, but is itself transformed into joy. Great Saturday is precisely this day of transformation, the day when victory grows from inside the defeat, when before the Resurrection, we are given to contemplate the death of death itself... all this is expressed, and even more, all this really takes place every year in this marvellous morning service, in this liturgical commemoration which becomes for us a saving and transforming present. (Source here)

So I had spent my life with a missing piece of the jigsaw puzzle of Easter, of my faith really. The Easter Vigil - and this is an argument for the central importance of the liturgy if anything ever was - enabled me to more fully enter into the reality of my faith, staving off some of the 'grey veil of doubt' which Ratzinger says has cast its shadow over Christendom.

Schmemann's explanation of Holy Saturday echoes what Tolkien says about the Eucatastrophe in the quotation above - "Joy and Sorrow at one, reconciled" - in the Easter Vigil sorrow is transformed into joy as Christ 'tramples death by death'. From the readings which talk of the yearning of fallen creation for deliverance, of the types and prefigurements of the saviour in the Old Testament, like scattered sparks of light which find their consummation in the great light of Christ, to the joyous acclamations of 'this blessed night' in the exultet, these all connect you to the great cosmic movement of fall and redemption, which Ratzinger calls in The Spirit of the Liturgy, the exitus and reditus - the going out and coming back - the great overflowing generosity of God as Love.

I have been re-reading the Lord of the Rings, and have fortuitously come upon the great triumphant climax of the story where the ring is cast into the crack of doom and Sauron is defeated and the King returns and vanquishes evil at Eastertime! But the passage above which I read today really struck me as a beautiful and moving portrayal of the way this eucatastrophe feels when mediated through a 'fairy-tale' - the tale of Eowyn and Faramir set against the backdrop of the defeat of Sauron, set against the even more remote backdrop in Tolkien's cosmic drama of the destruction of numenor (essentially a myth of Atlantis story).

In fact I saw in the passage direct echoes of the Easter Vigil - the waiting - the stillness of time coming to a halt - the reality of evil and darkness and then the great joy which no reason can deny. In fact the Eagle's song of joy and exultation could be a paraphrase of the exsultet! (And the reference to the Black Gate being broken and the King passing through is very clearly an echo of Psalm 24 which says:
"Lift up your heads, O gates! And be lifted up O ancient doors! That the King of glory may come in"
Ratzinger again says: "...this is the content of the message of Easter. Not only is there a door in, there is also a door out. Death is no longer a house with no exits, a place of no return." Therefore God becomes as we are that we may be as he is.)

More than this, there is an eschatological feel to it - Faramir feels that he is in the end of days and wonders if another great cataclysm is coming like the great wave that swept over Numenor. But the expectation and feeling that no darkness could endure in this hour; this is also part of the Holy Saturday vigil - to quote Schmemann again:

But this life between the Resurrection of Christ and the day of the common resurrection, is it not precisely the life in the Great Saturday? Is not expectation the basic and essential category of Christian experience? We wait in love, hope and faith. And this waiting for "the resurrection and the life of the world to come," this life which is "hidden with Christ in God" (Colossians 3:34), this growth of expectation in love, in certitude; all this is our own "Great Saturday." Little by little everything in this world becomes transparent to the light that comes from there, the "image of this world" passes by and this indestructible life with Christ becomes our supreme and ultimate value.

Every year, on Great Saturday, after this morning service, we wait for the Easter night and the fullness of Paschal joy. We know that they are approaching — and yet, how slow is this approach, how long is this day! But is not the wonderful quiet of Great Saturday the symbol of our very life in this world? Are we not always in this "middle day," waiting for the Pascha of Christ, preparing ourselves for the day without evening of His Kingdom?

Happy Easter to you all.