“the thicket of God’s wisdom and knowledge is so deep and so broad that the soul, however much it has come to know of it, can always penetrate deeper within it”

St. John of the Cross 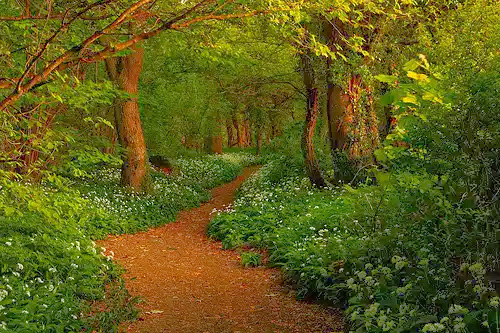 We shall not cease from exploration
And the end of all our exploring
Will be to arrive where we started
And know the place for the first time.

I have recently seen some amazing documentaries and articles which have made me reflect on an experience I had over 30 years ago. I was camping overnight in the forest close to my house. This fact may have given my experience its distinctive character, as I had plenty of time to contemplate the myriad branches and networks of the trees all around me.

In this experience I profoundly realised my own interconnectedness with every other living thing from the inside, in the domain of thought. That is, I believed I was able to see the connection of what I saw as my thoughts with the 'thoughts' of everything else around me, as a direct perception or intuition. I was not 'imagining my thoughts as branches of the tree above me'; rather, my own consciousness - the thoughts that were coming to me - were revealed to be part of the same consciousness everything else had. Following these connections led me to an ecstatic awareness of the whole, interconnected in all its parts. 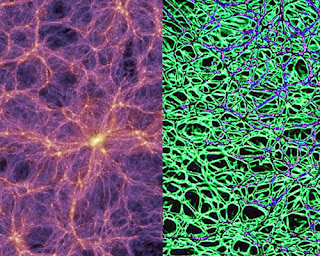 (dark matter next to fungal mycelium)

At the time I called it my vision of 'the all', and likened it to the Tree of Life of Jewish Mysticism. Now I might use other analogies for this web of connectedness - such as mycelium (the 'root structure' of fungi), which according to Paul Stamets 'is in constant dialogue with its environment, reacting to and governing the flow of essential nutrients through the food chain'. At the time this experience profoundly altered my own relationship to the world outside me, as well as made me reorient myself in relation to my own interior world. It was formative for my teenage self, and set me on a search for a more complete grasp of what I had glimpsed so briefly. 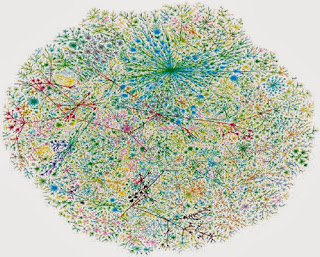 So when I saw this video about astronauts viewing the earth from space it made me revisit my experience. The idea that the most important reason to go to the moon was actually to look back at and rediscover the earth is the subject of this documentary. The experience of awe they had was a letting-go of themselves, a sense of total unity and oneness with all life. They called it the overview effect'.

I think the thing it brings most clearly is a very real sense of grounded humility, humility that comes from the humus, the leaf-mould on the floor of the forest, a sense of being part of a web. And it brings a wisdom, because the insight that is gained, that we can think no thought, which does not have some effect, never again allows us to cultivate a dangerous illusion of separateness from every other living thing.

Which leads onto the second documentary; this video on the intelligence of plants. In particular I was fascinated by this discussion on why rice has more genes than human beings (at about 12 minutes): "Plants and animals are not in a race, we can't say that plants have overtaken us. In reality its a strange kind of race because one has gone left, the other has gone right, their strategies are inverse. So now we have to recognise that on their journey , plants have gone much further than we have on ours."