I hope here to draw out some of the ways in which the first three of the sorrowful mysteries of the Rosary can be fruitful in drawing you into a closer relationship with Christ. These mysteries are profound sources of healing and refreshment if entered into in the right spirit.

My method will be to use the mystical tradition of the Church to draw out the depth of the three sets of mysteries. Traditionally the mystical path has three stages; first the Illuminative, then the Purgative, and finally the Unitive stage. These three stages correspond with the Joyful, Sorrowful and Glorious Mysteries of the Rosary. This ascent to God proceeds firstly through the natural graces by which the soul is initially fed by God when it begins on the spiritual path. These correspond to the earthly events of the incarnation and birth of Christ. Secondly, however, the soul begins to experience a certain dryness in prayer, and God seems to be withdrawing his graces. The enthusiasm which accompanied the beginner on the path has gone, and the soul has entered its 'dark night' of which St. John of the Cross speaks so eloquently. But this is a necessary path, because by withdrawing the more 'sensual' spiritual delights of prayer, God trains the seeker in pure faith, purging the will so that it may attain to the things of the spirit with more surety. This corresponds to the Sorrowful mysteries, and my aim here is to show how the events of Jesus' suffering and death can be a guide to our own path of salvation. Finally, when we have passed through the 'narrow gate', we are given some 'glory'. The Glorious Mysteries are stages of the Unitive path of the mystics, by which we ourselves can become 'Christ-for-others' in the world. In reality, these stages are perhaps not so linear - we are working on different aspects of them at different times. But one thing is clear - we will certainly not able to 'get some glory' (as Father Lazarus El-Antony puts it) until we have begun a life of prayer and entered with our whole being on the Way of Purgation represented by the Sorrowful mysteries. After all, didn't Christ say

“Whoever wants to be my disciple must deny themselves and take up their cross and follow me. For whoever wants to save their life will lose it, but whoever loses their life for me and for the gospel will save it." 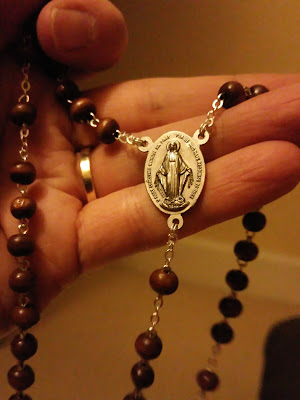 Introduction: Memory, Will and Imagination

The soul of every human being could be said to be a composite of memory, will and imagination. These three faculties need to be present if man is made in the image and likeness of God. The memory is our connection to the image, the will and imagination are the ways in which we can restore the likeness of God in our souls. Irenaeus said when we fell we lost the likeness but retained the image.

So memory, will and imagination are the keys to our theosis (participation in the life of God), but like all things in this fallen world, they can be misused. For example, an imagination darkened by worldliness, made impure by luxury and lust, sullied with self-indulgence, cannot attain the chastity necessary to be a light of joy to others. When we seek to privately take pleasure or use another as a tool to that pleasure we begin to destroy our natural capacity to freely participate selflessly in the joys around us. We bend our perception to our desire, and we make the world in our own image. Soon we tire of this image, and so we create more and more exotic images to substitute for the Real, but this is a fruitless quest, ending only in despair. No-one illustrates this better than Dante in the Inferno, as Charles Williams shows here:

[Talking of the lovers Paolo and Francesca]...each of the lovers had delight in the image of the other, and both of them had a mutual delight in their love. Their mutual lussuria indulged this. But lussuria cannot in fast stop there; the mutual indulgence is bound too soon to become two separate single indulgences....; they set up in the human organism a hunger for them which , from being mutual, becomes single. An appetite for the use of this Image prevails; this is Gluttony and this is the next circle of hell (VI).


The Sorrowful Mysteries: Taking up your cross

The Sorrowful mysteries represent a way of purgation, by which we may learn to die to ourselves. If we don't die to ourselves before the separation of actual death occurs, the 'sting of death' will not be avoided. The separation of death will only be a thing to be feared if we have not made this ecstasis, this journey out of ourselves, first.

"It seems to me that death is not merely an absence of life, but its essence lies in a process of separation. Soul is separated from body, and the parts of the soul and the body from each other. It is the dissolution of wholeness and unity that we face when we face our own death. As for life, it is that which unites, binding many parts into a single whole. As such, it is memory, understanding and love to which we must look for the secret of life. When Christians speak of immortality, we are referring to the existence we receive when God remembers, understands, and loves us. And in our own love for others is revealed that interior dimension through which we ourselves are renewed and resurrected. In fact all experience, when carefully attended to, arouses this sense of an interior."

St. Paul says, "For then we shall know, even as we are known", which means that God's knowledge of us becomes our knowledge of Him, and it is in this knowing (or sharing in the divine life which is really the trinitarian mutual gift-relation of God) that we are immortal, or rather it is in this remembrance, this understanding and this love, that we exist eternally. And clearly no false or sinful part of ourselves will be taken up in this knowing, which is why we begin the rosary now, and we make it a constant weapon in the spiritual battle against the tendencies of vice which we find within and around us.

The Sorrowful mysteries, as realities which have the effect of being like 'spiritual enzymes' in our souls - promoting the fermentation by which everyday 'water' can be turned into 'spiritual wine', provide the necessary bitterness or astringency to temper our sensual natures. To turn our memory, will and understanding from the world of sense into the dark night by which it may find itself finally loosed from slavery.

The first Sorrowful Mystery: The Agony in the Garden.
The spiritual fruit is the aligning of the will with that of the Father. So this mystery concerns the will. Our will is very underdeveloped when we can do whatever we want. Most people know this from experience - as soon as we get some time where we have the freedom from work to begin all those projects we always said we would, we fritter it, and end up frustrated. This is why the vow of obedience is so important. Obedience is almost completely reviled in the modern age, when the misuse of power is so widespread. But obedience, the handing over of one's autonomy to a higher centre, ie the basis of hierarchy, is an integral part of the universe. Without it we have no basis by which to value anything. Why do seekers after truth in the East search for a guru? To find someone to be obedient to. We have one Master, the Lord, and we do not need to search for Him far and wide.

In this mystery Christ retires to a secluded olive grove outside Jerusalem. It is night and he brings only Peter, James and John. That they cannot stay awake and pray with him tells us something about the will. The faculties such as the intellect and understanding, the reasoning faculties, can only help us so much. At some point we have to relinquish them, and go into the darkness with pure intention alone. We must constantly make our intention pure through prayer, fasting and confession, and the purity and one-pointedness of our intention will bring us through the night of agony.

When you pray this mystery try to imagine the great intensity of Jesus' prayer that night in the garden. Try to feel the great struggle by which we stay awake to the spirit, by which we pray and mean 'Thy will be done'. If we truly pray this what earthly kingdom can prevail against it?

The Glorious mystery that corresponds to this is the Resurrection - the will's purification through obedience results in faith.

Part Two coming soon: The second Sorrowful Mystery: The Scourging at the Pillar. The spiritual fruit is the purification of the imagination.