"My sister, my spouse, is a garden enclosed, a fountain sealed up.
The fountain of gardens: the well of living waters, which run with a strong stream from Libanus. Arise, O north wind, and come, O south wind, blow through my garden, and let the aromatical spices thereof flow."
The Song of Songs 4:12 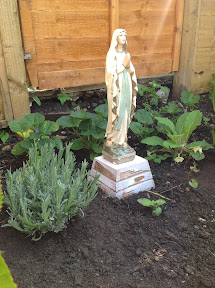 Today I got started on my Mary Garden. This is something I have been planning for a while since I saw the idea on the internet. I bid on a vintage chalkware statue of Mary on ebay, which I got for £21, cleared some ground and planted some plants and flowers associated with Our Lady.

In medieval England many flowers and plants were associated with Mary. There are some obvious ones such as the Lily and the Rose, ones like the Marigold, which become obvious as soon as you think about the name, and then lesser-known ones like the Forget-Me-Not, which is also known as Mary's Eyes - blue with yellow in the centre.

The fact there are very many plants and flowers associated with her is testimony to the power of popular piety and the folk imagination in weaving the everyday world into religious stories. Perhaps it also reflects the fact that England was called Mary's dowry, and seen as sacred to Mary from as long ago as the reign of Richard II. In fact a painting called the Wilton Dyptich depicts this idea: 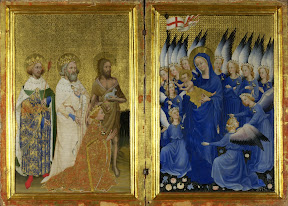 The flowers beneath her feet are recognisably Marigolds, Roses and Irises I believe. For me there is a deep connection between my native soil and the figure of Our Lady. Anciently this land was called the Enclosure, or Prydein, and being an island, could properly be said to be enclosed. The climate, and temperament of the people, have also made it a land of gardens. It seems that the title 'Enclosed Garden' applies equally to Mary and England.

From my teenage years I was obsessed with the Glastonbury legends that tell of a voyage of Mary to these isles after Christ's death with Joseph of Arimathea. Supposedly a very early church of wattle and daub was set up there and dedicated to the Blessed Mother.

Of course, reading of Lorien and Galadriel in The Lord of the Rings with these things in mind will help many to see that these things were probably a part of Tolkien's vision! Lorien in particular is a kind of 'enclosed garden' which is impossible to get to in any normal way, and which doesn't seem affected by time and seasons in the same way as the rest of Middle Earth.

Although the idea of having flowers in gardens named after Mary goes back originally to monasteries, it seems that typically, it's the Americans who have properly got to take credit for the Mary Garden as we currently know it. John Stokes, a Quaker who had a sudden conversion to Catholicism in a garden, became inspired to create one after reading an article about a garden created by a lady called Frances Crane Lillie, and subsequently the idea spread.

Here is an excerpt from that article:
During her travels in Europe Mrs. Lillie had learned that English monastery gardens once included flowers with names associated with Our Lady. She wanted to create a garden in the "tradition of Mary Gardens throughout the world" and asked a friend, Winifred Jelliffe Emerson, to search early plant literature for plants with religious and Mary names. Mrs. Lillie's original plan for the twenty foot square garden included sixty-one plants. Of these 33 were "Her Flowers," seven "Flowers of the Saints," and 21 "Other Religious Flowers," many of them English wildflowers. This 1932 list was modified as some plants thrived and others fared poorly in the wind and rain-swept site; the 1937 final plan contained 48 plants. Prominent were roses, lilies and irises, all emblems of Mary.

I don't have nearly as many flowers as this. But this is what I have planted so far:
Lavender
Forget-Me-Nots
Primroses
Rose
Hollyhocks

and many more in the long term!

The Didascalicon of Hugh of St. Victor

("Of all things to be sought, the first is that Wisdom in which the Form of the Perfect Good stands fixed") 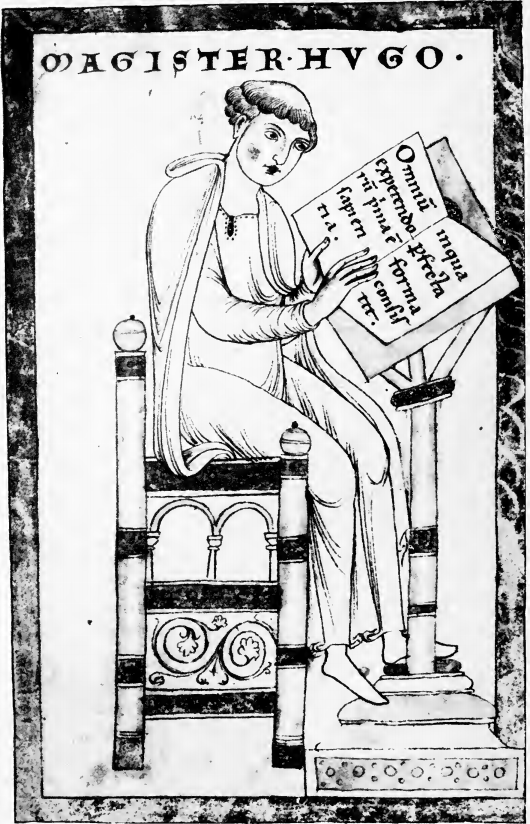 Amongst many other books I'm currently about to read (I'm on the introduction) this one. I first heard about it in Stratford Caldecott's excellent book Beauty For Truth's Sake: On the Re-Enchantment of Education. Hugh of St. Victor (d. 1141) has something to say to educators today about the usefulness (in a higher sense) of the liberal arts.

Mary, Undoer of Knots - The Annunciation and the Destruction of the Ring

March 25th is a date which carries a particularly heavy load in terms of Christian tradition of scriptural events. Aside from being the supposed date of the Annunciation (9 months before Christmas day), it is also the date assigned to the Crucifixion, the creation of Adam, the fall of Lucifer, the passing of Israel through the Red Sea and the immolation of Isaac.

Clearly, these are best seen in a symbolic sense for the light which they cast upon each other, rather than getting caught up in overly literal questions about how we can possibly know when these events happened. But we should be wary of making the opposite error of thinking - that it doesn't matter what the date of the event is.

In the Spirit of the Liturgy, Cardinal Joseph Ratzinger reminds us that redemption happened within time and space, the great became the small, eternity intersected time, and thus many consequences flow from this. For instance, we talk about the orientation of buildings, which situates and locates them in space in relation to the four directions. But how often do we remember that the word 'orientation' literally means 'easting', which came from the way in which church buildings were built facing east towards the direction of the rising sun as a symbol of salvation. Just as important are the dates of the Church year around which the liturgy is built, and which tell a story of salvation in time.

So dates matter. Tolkien spent a great deal of time making his calendar for the events of the Lord of the Rings accurate, even working out what the phases of the moon would have been. It mattered to him to put the date of the destruction of the Ring as the date of the incarnation/crucifixion.

Frodo couldn't accomplish the task alone – he needed Sam at times to carry him, but more than this he actively renounces it – he says “I do not choose to do this” – and the deed of destroying the ring is done by the final evil deed of Gollum who bites off the ring and falls into the pit. In Tolkien’s sub-created world situated before the incarnation Frodo is a kind of shadow of Mary.

Mary's free choice to be the God-bearer undoes the evil created by the original disobedience, which contrasts with Frodo’s non-choice, a final inability to perform the act of destruction, perhaps because of the harm inflicted upon him by the wearing of the Ring. The lesson is clear - Frodo is not the God-man, and thus the power to undo such great evil is not within his ability. However, events themselves conspire to produce the intended result anyway, a clear signal of the way in which fate works in Tolkien. But in a masterful touch evil is destroyed by evil - the final evil grasping act of Gollum cancels out the greater evil of the Ring.

To me, there seem to be clear echoes of one of the early versions of the doctrine of atonement here, where Christ acts as a kind of bait, taking upon himself evil, drawing evil to him in his powerlessness, and then destroying its power through his sacrifice. Evil is tricked through its own short-sightedness and inability to see beyond its own closed circle. In this way also, Gollum is so enslaved and blinded by his desire for the ring that he cannot see the pit into which he falls.

In the world of primary creation (our world) the knot of sin is undone through a gratuitous act of self-giving; grace freely given and freely accepted is what finally restores paradise.

In my next post I want to contrast this Christian path to redemption with ‘gnostic’ views within which knowledge frees humanity from the slavery of sin and ignorance.